Why Don't Cereals Have Toys Inside Anymore?

Man, I remember I got one of these toy Starbots in a Kellogg's cereal back in the day. It was the helicopter one. So amazing! Check out the commercial for it! 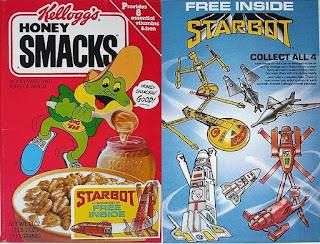 So when I had kids, and finally got back into sugary cereals, I was completely bummed to find out that there weren’t prizes in any of them—at all! Now, full disclosure: I think I have found a couple cereals with toys in it in the past nine years. And of course I make a big deal about it. I’m like, “Miles, Haley, come! Gather around the cereal box! Let us did for treasure!”

So where my toys at?

As legend tells us, Kellogg’s Corn Flakes was the first cereal to offer free stuff around the turn of the century. Oh, wait, not this last century turn, the one before that. Let’s say 1909. That’s when, if you bought two boxes of Corn Flakes, you got The Funny Jungleland Moving Pictures Book. Check it out, the 1909 copy is going for around $80.

Anyway, this trend really caught on. Check out some of these awesome prizes RealClear.com found:

A record in Ghostbusters 2 cereal. By the way, Ghostbuster cereal was great. But I’m really not sure about the sequel cereal though.


I’m pretty sure I snagged one of these Cap’n Crunch glow-in-the dark circus acrobats. And yes, captains wear four bars on their sleeves, but Crunch doggy dog only has three. So technically he’s just a commander.


If this crazy chain in Rainbow Brite doesn’t say 80s. We’ll you get it…


Here’s something for the kids. You can assemble this gun out of a Cheerios box. 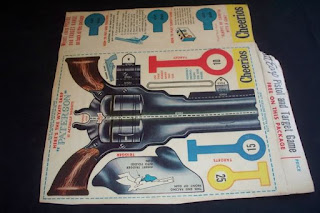 And I’m going to end with Mr. T here and his sticker inside. Just because he’s Mr. T. You ever hear the Mr. T GPS. It was great. “Don’t make a right on Elm Street foo!. Stop with the gibber jabber and make a left instead.”


So I says to myself, “Self, what did happen to the toys in the boxes?” Everything I’ve read pretty much points to the fact that the cereal makers got cheap. And giving away free swag can get costly. Adding to the reasons for the demise of toys in cereal is a post on the website ExtraCrispy.com, where I do all my research.

It’s interesting. They say that in 1988 there was a recall of 30 million flutes and binoculars that were in boxes of Kellogg’s cereal because they were a choking hazard. Hey, a 45 record is a choking hazard too if you do it right.

The post also says that back in 1974 the FTC actually banned the TV advertising of so called “premiums” to kids.

But we’re not going to end on a sad note. This is Instantly Dated, baby! Check out this ad from 2013.

That’s right, FTC. Put that minion toy in your mouth and choke on it!

I remember making such a big deal out of pulling this toy out for my son, Miles. It was like we found ark of the lost covenant. Except neither of our faces melted.


Hey, if you're looking for a show where Gen Xers can geek out on retro stuff, obscure content and video production check out the Instantly Dated show on Facebook or YouTube.

And if you're interested in finding out how the sausage is made when it comes to producing TV and online news, check out my book.

Posted by Instantly Dated at 5:59 AM